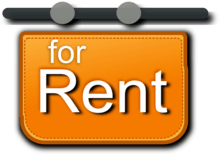 A few years ago, I saved thousands of dollars over several years while staying in the same rental unit in Northern Virginia.  We all know that you can negotiate initially when renting a unit.  But you can also negotiate rent even after you have moved in simply by asking to keep your rates fixed rather than allowing the landlord to automatically ratchet up the rates each year.

To begin the process, I simply politely emailed my property manager that I noticed they were attempting to raise my rates, that the property was already at the high end of what I could afford, and asked them to consider keeping the rates fixed for the following year.  The first two years the manager agreed (after attempting to raise my rates by about $100 per month). The final year they met me half way at a raise of $60 per month.  The entire back and forth probably took less than an hour of my time each year and saved a lot of money.  By the way, I even tried to get them to lower the rate during the Great Recession, but didn't pull it off.

Keep In Mind The Overall Market When Negotiating Rent

Of course, your leverage in negotiating rental rates will be driven by the tightness in the rental market.  So don't shoot for the moon if there are tons of people moving to your city and apartments are in short supply.  But even then it never hurts to ask.  It could save you thousands of dollars.

What about you? What have you negotiated lately?